The purpose of this discussion is to show how saddles with different design characteristics produce different pressure profiles across the seated area.

From an ergonomic perspective most ‘traditional’ or ‘v-shaped’ saddles can be categorised simply into three primary groups based on the lateral profile: flat, semi-round and round. Within these groups there are also common variations, for example: the provision of a perineal ‘cut-out’, the degree of ‘wave’ along the longitudinal plane, as well as the width of the rearward section of the saddle.

The various design aspects are purported to fulfill specific functions. The aim of this discussion is to compare how saddles with different lateral profiles, as well as with and without a perineal ‘cut-out’, distribute pressure.

Saddles with a ‘rounder’ lateral profile are said to distribute pressure more evenly across the entire seated area than ‘flatter’ saddles. Flatter saddles are said to isolate pressure in what is known as the ‘sit bone’ region. However, for most road bike positions it is the pubic rami not the ischial tuberosity– the ‘sit bones’ – where the pressure usually resides (but that is a topic for another discussion). In addition, the provision of a perineal ‘cut-out’ is also said to further isolate pressure.

The two case studies below provide information that illustrates these points. We have recorded the saddle pressure maps of cyclists that are unremarkable in their anatomy and posture on the bike on two different saddles with their fit position (saddle, handlebars and cleats/pedal) optimised within a normative range and pedaling at a consistent cadence and power output.

The image below shows the saddle pressure maps of our first cyclist, a middle-aged male cyclist, riding between 150 – 200km per week at a recreational level. This cyclist had previously been fitted by Elbows Akimbo, and had returned for a follow-up consultation after the purchase of a new pair of shoes as well as experiencing some intermittent, but mild perineum discomfort.

The image on the left (Fig. 1a) shows the cyclist’s saddle pressure distribution on his existing Prologo Nago – a semi-round saddle without a ‘cut-out’. In Figure 1a, the saddle is behaving as expected and pressure is distributed relatively evenly across the seated area (58% front/42% rear).

A flatter saddle with a ‘cut-out’, the Prologo Zero II PAS, was fitted to the bike and the fit position adjusted accordingly. In Figure 1b, the pressure is concentrated in the pubic ramus regions with less pressure on the mid to front section of the saddle, away from the perineum (34% front/66% rear). 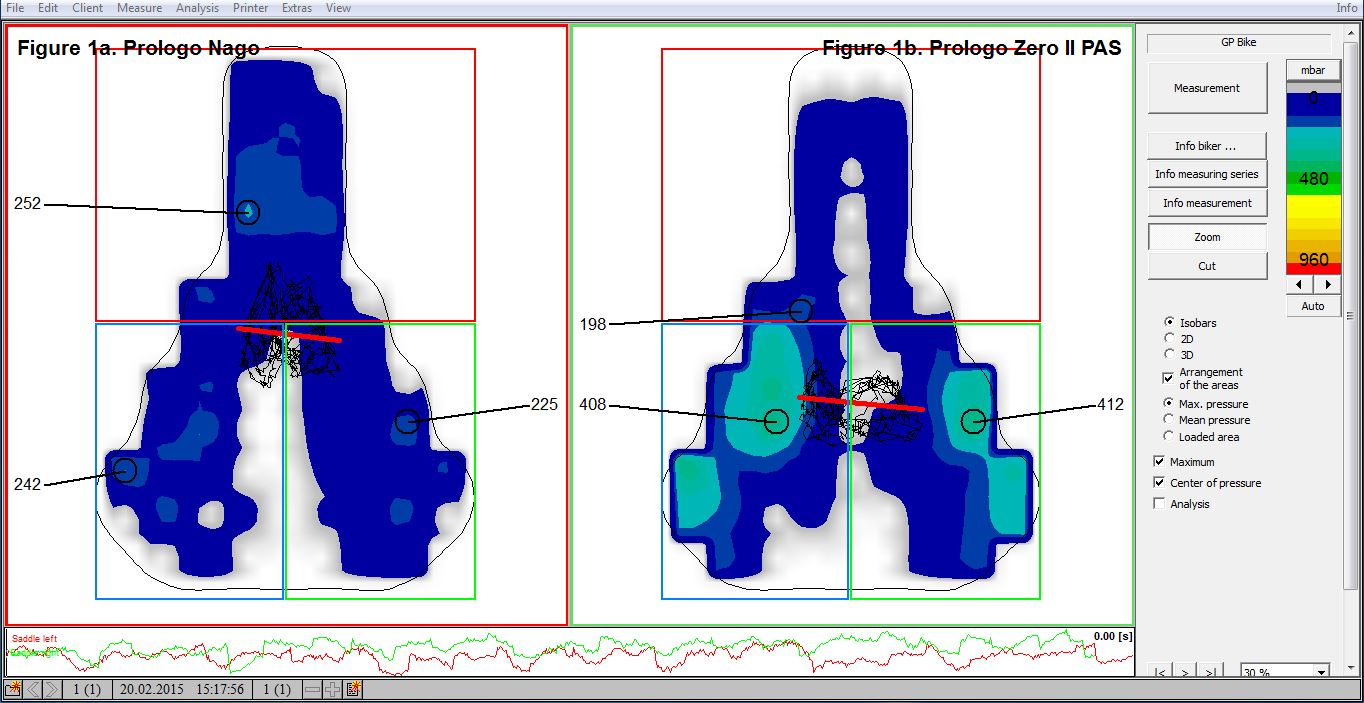 The next case study is an experienced middle-aged male rider in heavy training for the upcoming 3 Peaks Challenge that had reported moderate to high level of perineum discomfort and numbness.

The image below shows the cyclist’s saddle pressure maps with his existing saddle a Prologo Kappa (Fig. 2a) and with the new saddle Prologo Zero II PAS (Fig 2b). In this example, the images show that the pressure change has been more pronounced than in the previous case, with the flatter Prologo Zero II PAS saddle isolating pressure almost exclusively in the pubic ramus regions (18% front/82% rear) as compared to the rounded Prologo Kappa (45% front/55%rear).

There was some concern that pressure may have been isolated too acutely with the new saddle, but follow-up has been positive with the cyclist reporting a complete elimination of perineum discomfort and no ill-effects from the additional pressure on the pubic bone. 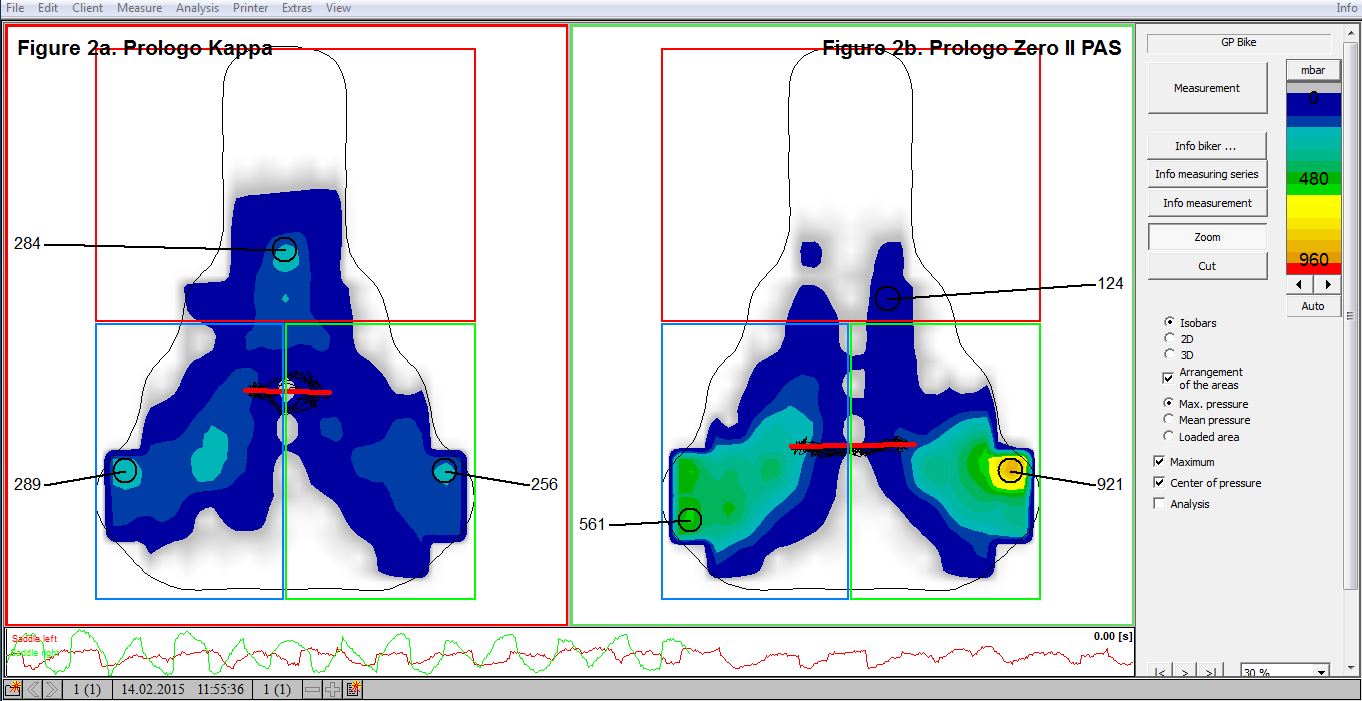